Today we went to a Maple Sugar Festival.  It's a really fun place with tons of free activities for the kids.  First, we went on the tour to see how they collect sap and then turn it into syrup. 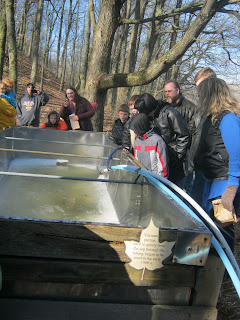 After the tour, we headed to the children's area.  The boys really enjoyed the homemade skee-ball game: 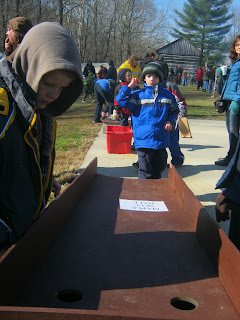 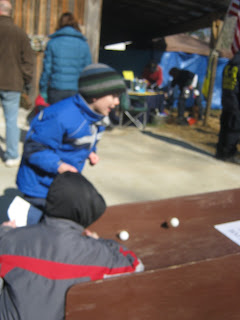 All three rode the merry-go-round: 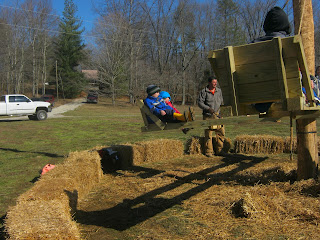 Malachi and Lydia shared a seat, and he kept his arm in front of her the whole time. 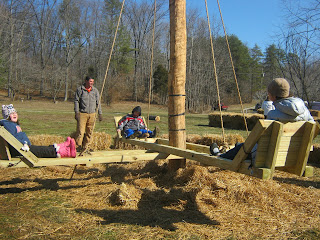 and in the indoor treehouse: 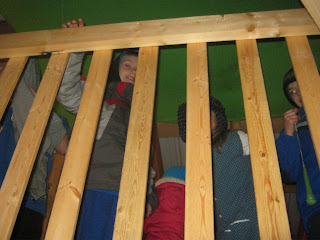 We had a great time!

Well, we've finished hardwood flooring throughout the upstairs except for our bedroom.  We plan on working on that soon, but first we wanted to paint the walls, which meant that the wallpaper border had to be taken off.  So this is what I did yesterday. 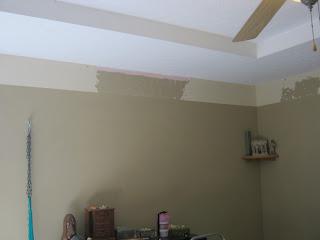 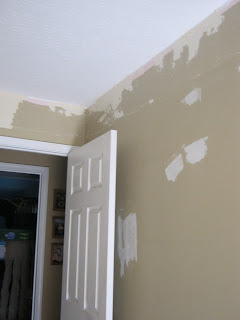 These pictures are in-process.  I did get it all scraped off, it just took basically all day.  My hand was really sore last night, so I thought today I might not be able to use it much, but it has surprised me.  It's actually almost normal today.  (I have a lot of issues with my right hand, due to a little mishap with luggage in the baggage claim area about 12 years ago - causing nerve damage - plus about 15 years worth of carpal tunnel in both wrists.  So sometimes it just doesn't work right, or hurts.)    I'm thrilled that it's in pretty good shape today, because I'm helping coach 11-14-year-old girls in volleyball tonight!  I was asked to help out with a Y clinic that will be once a week for 8 weeks.  It falls on Thursday nights, which is perfect because we don't have church, boyscouts, etc, so Nathaniel can just keep the kids home and put them to bed on time.  Fun stuff.
Posted by Angel at 9:34 AM No comments:

It's a chilly, damp morning here.  Normally I watch two little girls on Tuesdays, but today I'm not, so Lydia and I are hanging out at home.  I have to do some cooking, cleaning, and laundry.

I had a great weekend with my friend Katie.  It's the first time I've went to visit her by myself, and it was a lot of fun.  The kids had fun here with Nathaniel and his cousin Jake came, which was a big treat, too.

I've been researching Bulgarian food and how Western foreign archaeologists lived in Egypt in the 1890s.  (Obviously not for the same reasons!)   The food research has been fun, and I'm going to have to try out some of the recipes I've come across.  The Egypt bit is a harder one to search out, as you might imagine.

To completely change the subject, my sister makes really cute coasters, crosses, etc with magazines.  When I was at Katie's, I spotted these vases: 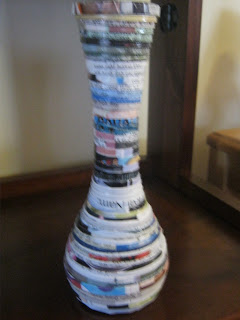 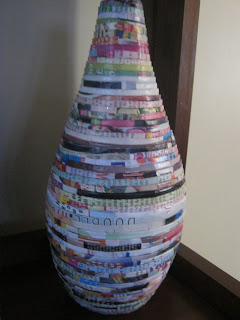 I don't think they'd be hard to make, but very time consuming.  They did look really cute on her bookshelf.

As many of you know, Nathaniel is deathly allergic to penicillin.  Both boys have shown allergic reactions to it, too, but Lydia had never tried any of the "cillin" drugs until this week, for an ear infection.  And the verdict: 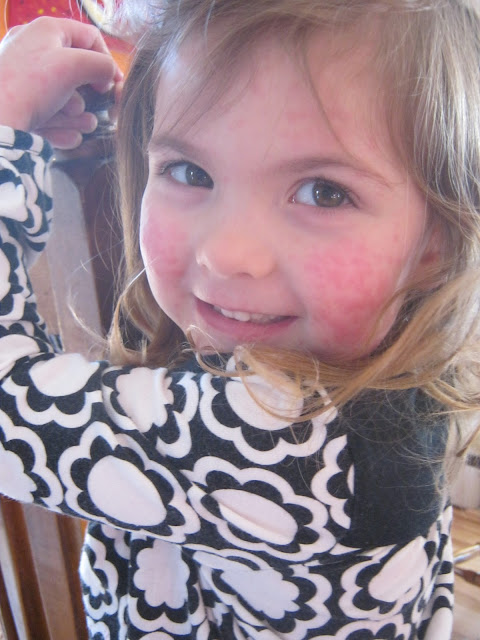 My poor baby is covered from head to toe in an itchy, bright red rash.  She keeps saying she has "chicken pops".  I think I've finally convinced her not to call it that (as we might get some ugly looks in public from people who would assume she's contagious!).  But she is quite a mess.  This didn't stop her from wanting a full photo shoot, though: 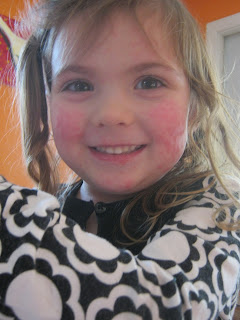 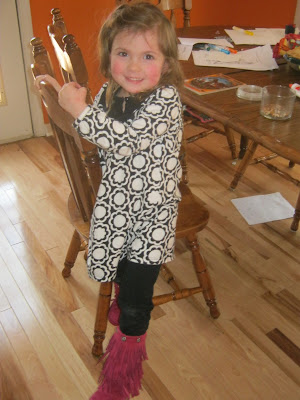 See the boots in that third picture?  I was supposed to get them in, too.  She's quite fond of them.  I told her I wanted one picture for the blog, to show family her rash.  She was worried that you would all think she's an animal, since she has spots.  I assured her that no one would mistake her for a leopard.  Then she was all smiles.

...in February!   I actually got some yard work done today.  It's around 50 degrees, and unlike yesterday, it's not windy, so we spent quite a bit of time outside today.  I mulched the raspberries: 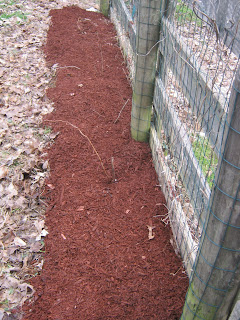 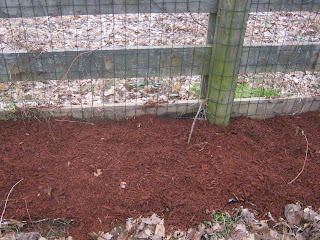 It doesn't look like much, but those little canes you see sticking up are the raspberry plants.  I hope to have more than a few raspberries this year, since about 4 of the plants are established now, and there is one smaller one, too.

I also got a shot of the 3 chickens, with Puff the rooster out front and the hens behind him. 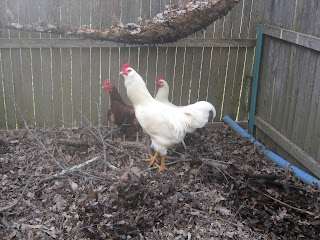 All in all, it was great to have a day to work in the yard in February.  The kids are still outside playing.  I had to come in to get dinner in the oven, and so decided to post while I monitor that.  It's supposed to rain tomorrow, so we'll have to soak up the good weather while we can!

The boys are off to the Derby this morning, the Pinewood Derby.  They are really proud of their cars. 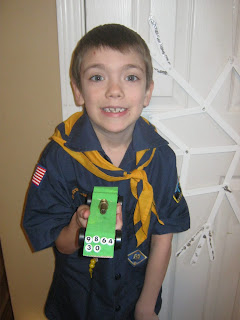 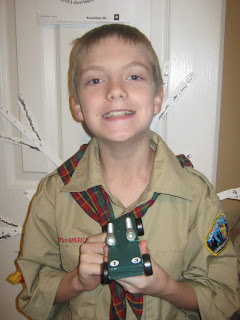 And Lydia wanted her picture, too, of course.  You can tell she's still a bit under the weather, but she's doing much better now. 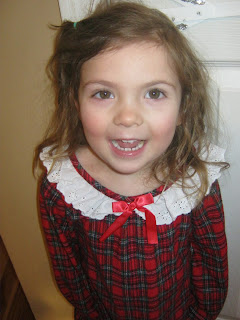 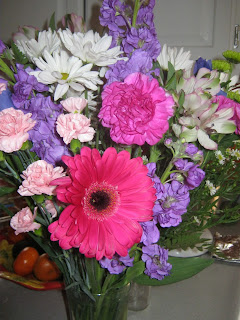 Lydia has croup.  And an ear infection.  We went to the doctor this morning, and they gave her some steroids so hopefully tonight will be a bit better, but it could be a while before she's all better.  Needless to say, sleep has been minimal, and Lydia is quite clingy, so I'm not getting a whole lot done.  And, of course, Nathaniel is in Dubai.

But he sent me a pick-me-up today: cut flowers.  We have a great local flower place that will sell him lots of cut flowers cheaper than most places sell vases full.  Today I had enough to fill 2 of my  vases, so there are bouquets in the living room and kitchen. 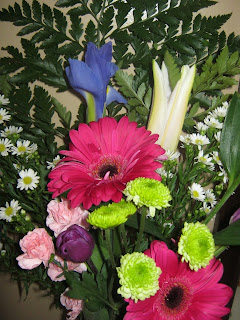 It's just a reminder that life is good, even when it kinda sucks.

Every once in a while, I get the urge to change things.  Yesterday, the kids had a snow day.  While I let them play in their pajamas, I decided to tackle something that's bothered me for years: 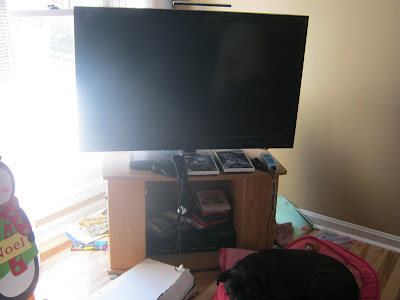 Our TV stand in the living room.  It's always been a cheap, rather pathetic piece of furniture, but now it's also falling apart.  So I got rid of it and moved this table/cabinet/nightstand thing in its place: 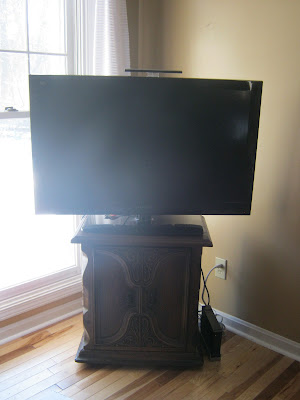 I think it looks much better.  It also puts the TV up a bit higher.  I like that it has a door to conceal the VCR and Wii games.  The Wii itself is on the floor next to it, but I don't think that's a big deal.

Other than that, I've been sewing and sifting through the adoption preparation education stuff.  I've made several doll hoodies this week.  This is my favorite: 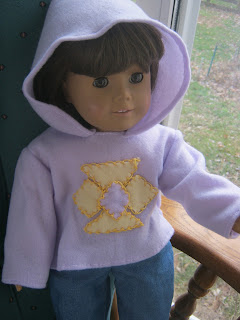 I had fun playing around with my scraps and creating a new design.

The kids had a great snow day yesterday, and Nathaniel came home a little early so we all went out to dinner.  He's at the airport now, ready for his flight to Dubai.  We're not looking forward to him being gone for the week, but I'm so very thankful that he doesn't travel all the time anymore.

I was going through some of my recipes a few weeks ago, and this one popped up as something I'd like to try.  I copied several recipes from Grandmommy's box when she died, and this one looked good even though I don't remember eating it.  Now I realize why: when I was describing the recipe to my dad, he said she used to make it when he was little, but stopped after Ann got the stomach bug after eating it as a teenager.  She'd whine that she couldn't stand the smell of it, so Grandmommy stopped making it when Dad was about 10.  Dad also said she called it Swiss Steak, but it's not what I grew up calling Swiss Steak (that's a different excellent recipe from my Mom and Mamaw).  Anyway, I made this pot roast, and Nathaniel said it "is what heaven tastes like" and requested it once a week.  I don't know about that, but I've made it twice now in 2 weeks, so he's pretty happy.

Serve with mashed potatoes for that great sauce.

One year ago today, I carried Gyunay out of the orphanage forever.  A staff member poured water on the steps, and Nathaniel and I walked thr... 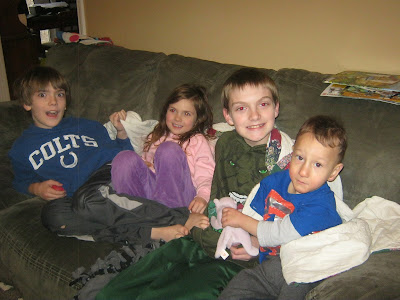 Angel
Why "Barefoot Kentucky Mama"? Because I am one. I have four kids, spend a lot of my time in the kitchen, and I'm barefoot whenever possible. My Catholic faith is always a work in progress, and I pray for guidance every day. I've been married to Nathaniel, my amazing husband, since 2002. I have a dog, chickens, and a big garden. I try to keep things green as much as I can, but I'm still a work in progress. I mostly cook from scratch healthy things, but again, I'm working on it, and I do believe in having desserts every now and then. (I just made whole wheat sourdough rolls...and chocolate chip cookies.) I love to read, write, cook, be outdoors, and sew. I'm passionate about adoption, and one of my kids was adopted from an orphanage in Bulgaria. I live in a small town in Kentucky. I like small towns. I've lived in several in Kentucky, and in Indiana (where I'm from originally), and one in Texas (which was way too far from home). I love my family, both immediate and extended. I have been very blessed! 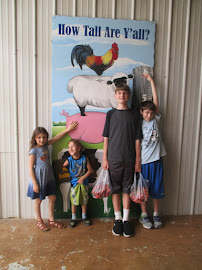